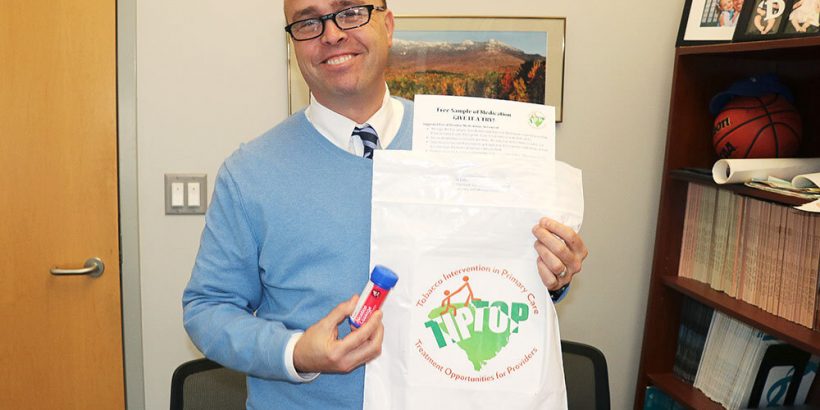 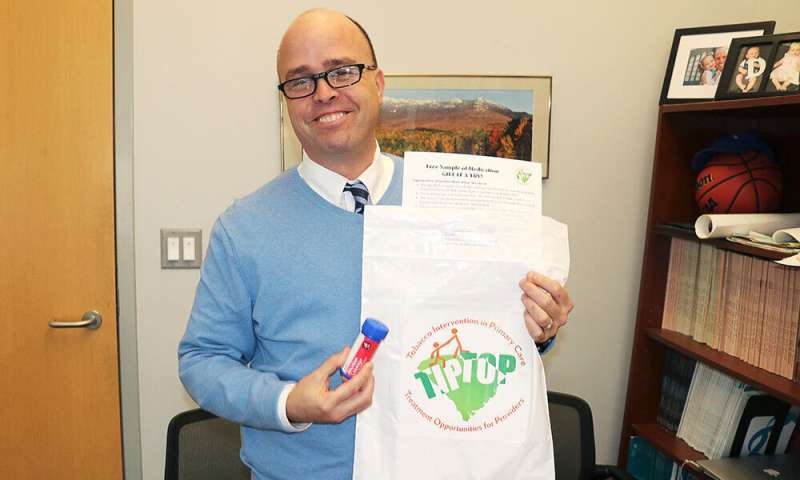 While sitting in the dentist’s office, Hollings Cancer Center researcher Matthew Carpenter, Ph.D., of the Medical University of South Carolina, had a bright idea.

As he received his goody bag with dental hygiene products, he wondered why not conduct a study and have primary care providers do the same thing for their patients who use tobacco. The bags would contain educational material, free lozenges and tobacco cessation medications to encourage people to stop smoking.

Results from the study, recently published online in Addiction, weren’t surprising to Carpenter. He and colleagues found providing smokers with a free, two?week starter kit of nicotine replacement therapy (NRT) increased quit attempts, use of stop smoking medications, and smoking abstinence as compared with standard care in a primary care setting.

“Not a day went by in this study when I was not excited by it because I knew that we were having an impact on real patients in the real world with their doctors,” Carpenter said. “This gets the patients to know that their doctor cares, and they have something they can use right now.”

Carpenter believes a smoker’s annual visit to the doctor creates the perfect window of opportunity for a physician to provide a quick intervention, while providing tools to help smokers begin the process of quitting. Along with advice on why and how a patient should stop smoking, a person should be able to walk away with a product they can use immediately to try and stop their dependence on nicotine.

“About 70 percent of smokers will see their primary care providers on a yearly basis,” Carpenter said. “It’s a clinical encounter to do something, but I think we can offer them tools other than words.”

In the U.S., 34 million adults currently smoke cigarettes and nearly 70 percent of U.S. adults who smoke say they want to quit, according to the 2020 Surgeon General’s Report.

The $2 million study, Tobacco Intervention in Primary Care: Treatment Opportunities for Providers, also known as Tip Top, included 22 clinics throughout South Carolina and was conducted in collaboration with the National Institute of Drug Abuse (NIDA). A total of 1,245 patients participated in the study.

The study included 652 patients from 12 of the clinics who only received advice on the importance of quitting smoking. The remaining 593 patients at 10 clinics were provided with samples of medication to use including nicotine patches and lozenges. During the study, all smokers were advised to quit through a regular conversation with their physician.

They also received information and resources to help them quit smoking and information about Quitline, a tobacco cessation service available through a toll-free telephone number.

Carpenter said that the study was well-received by primary care providers, who welcomed the goody bag as a conversation starter. “The doctors are giving something that is concrete and immediately actionable,” Carpenter said. “The patient can go home and use the products that day.”

During this study, 26 percent of patients who received the NRT samples achieved at least one week without smoking. “If you can achieve seven days in a row of not smoking, I’m going to call that success,” Carpenter said.

The study also found that 12 percent of patients were quit at final follow-up (six months). While this may seem a modest amount, it’s more than 150 patients who potentially will save thousands in medical costs if they are able to quit smoking, all for just the cost of a $70 intervention. “That has to be cost-effective no matter you slice it,” says Carpenter.

On average, it takes a patient seven to 10 attempts of trying to quit smoking before becoming successful, so interventions such as this can be helpful in the process. Even for the smokers who didn’t use the products, it planted a seed, he said.

An interesting finding during this study showed that the smoking cessation bags with information and medication were more beneficial to patients who had a lower income, lower education or if they were in the more rural areas of the state. The finding on income, education, and rurality is an area Carpenter would like to study more in the future.

“It’s about access,” Carpenter said. “We’re helping people who are struggling out there to find and succeed in treatment.”

Given the toll of smoking-related health conditions, Carpenter said he hopes insurance companies will see the value and provide funding in the future so that primary care physicians could offer this to their patients. The concept also could be used for smokers who are leaving the hospital, or even those who have been incarcerated.

“These samples can be given out almost universally—even to smokers who may not want to quit and who may not yet be ready to try medications,” Carpenter said. “It’s a pragmatic and brief intervention that takes minutes to deliver and is scalable as an intervention to be used a variety of settings.”

Carpenter said the intervention provides patients a starting point to their journey of becoming smoke-free and it’s simple to use for primary care providers, who don’t feel pressured to have a long lecture. They can just offer their patients support.