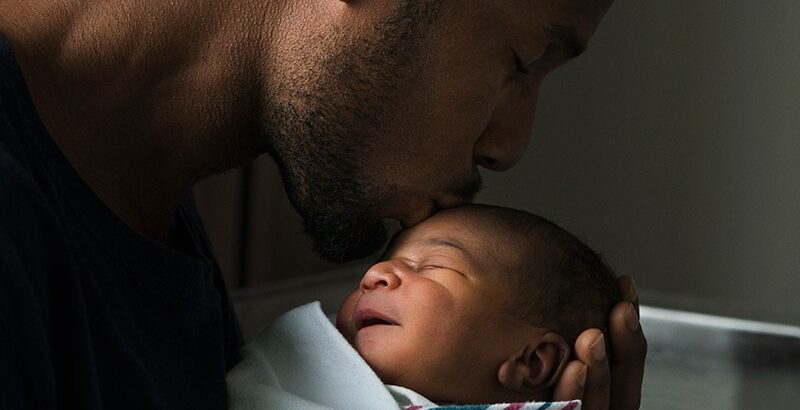 First-time fathers appear to experience a loss of cortical volume following the birth of their child, new research suggests.

Investigators associated with the Instituto de Investigación Sanitaria Gregorio Marañón in Madrid, Spain, and the University of Southern California compared MRIs of the brains of 40 new fathers (half located in the United States and the other half in Spain) to a control group of men without children.

Both samples of new fathers showed reductions in cortical gray matter within the default mode and visual networks, although the subcortical structures were preserved. These findings persisted after controlling for the fathers’ and children’s age at the postnatal scan.

“Across both samples, we found similar results, which was that fathers showed remodeling of the brain from prenatal to postpartum compared to our childless control group — they lost gray matter volume, particularly in the parts of the brain that are linked to social cognition and theory of mind,” co-author Darby Saxbe, PhD, associate professor of psychology, University of Southern California, told Medscape Medical News.

“It would be an easy punchline to say, ‘Oh no, I’m losing gray matter and my brain is shrinking,’ but we think the story is really that there is some kind of consolidation and reorganization in the brain that is streamlining the social processing area so that new parents are becoming more efficient, developing skills associated with parenting, and forming a bond with the new infants,” she said.

The study was published online September 4 in Cerebral Cortex.

“The transition to parenthood is a critical period of enhanced neural plasticity in adulthood,” the authors write.

“During the past decade, researchers have discovered a global human ‘parental caregiving brain network’ that is sensitive to pregnancy-induced factors and sensory cues from the child,” advancing “a conceptualization of the postpartum period as a crucial life window to study experience-dependent neural plasticity,” they add.

Fathers involved with parenting are “ideal targets for study” because they experience the “cognitive, physical, and emotional demands of caring for a newborn without going through pregnancy.” However, most research into brain changes associated with new parenthood has focused on mothers.

Emerging evidence for maternal brain plasticity has led to a “growing interest in paternal neural plasticity.” The few studies that focused on men reported “brain structural changes that are less pronounced and affect fewer regions than those reported in biological mothers.”

The fathers underwent imaging before the birth of their first child and again during the postpartum period. The Spain-based fathers were scanned before their partners’ pregnancies and at 2 months post partum, and the US-based fathers were scanned during the third trimester of their partners’ pregnancies and at 7 to 9 months following the birth.

The investigators found no significant changes in the control group of childless men. Moreover, subcortical volume did not significantly change within groups (all Cohen’s D < .41; all uncorrected Ps > .08).

Pairwise group comparisons found that both the Spanish and the Californian fathers’ volume reductions within the visual network and the Spanish fathers’ reductions in the dorsal attention network significantly differed from those of the control men.

“This study is the first to identify structural brain changes in first-time fathers that mostly affect cortical circuits, involved in social understanding, and not subcortical circuits, associated with reward processing and motivational approach,” the authors note.

The “preserved limbic subcortical network, which is particularly sensitive to pregnancy hormones, appears to play a more central role in maternal behavior, while fathers rely more on cortical networks that may engage to facilitate the cognitive and emotional demands of parenting.”

The findings “may suggest a unique role of the visual system in helping fathers to recognize their infants and respond accordingly, a hypothesis to be confirmed by future studies,” the authors suggest.

“What’s really interesting about the fathers in particular is that they don’t experience pregnancy directly, so the fact that we’re still finding some differences in their brains is really notable, since they didn’t have the kind of biological changes that accompany pregnancy,” said Saxbe.

“We could very well see those kinds of changes if we looked at other kinds of new relationship formation — for example, adoptive parents — although this sample focused on biological parents because it included men who were recruited as partners of pregnant women,” he added. “We think this is an adaptive modeling of the brain.”

Survival of the Next Generation

Commenting for Medscape Medical News, Jodi Pawluski, PhD, HDR, a behavioral neuroscientist and psychotherapist at the Women’s Health Research Cluster, University of British Columbia, thinks a primary take-home message of the study “is that structural brain changes exist in father too, even without the physiology of pregnancy.”

Pawluski, who hosts the podcast, “Mommy Brain Revisited,” and was not involved with the study, suggested that this “points to the neurological adaptations in nonbirthing parents that are likely important for learning how to parent.”

Further research “needs to determine the mechanism of these neurobiological changes in fathers and exactly how they relate to caregiving,” she said.

The study “points out that parenting is a time in the life of mothers and fathers, birthing and nonbirthing parents, when significant neurobiological changes exist [that are] vital for ensuring the survival of the next generation,” she added.

The study was supported by Ministerio de Ciencia, Innovación y Universidades, and by Instituto de Salud Carlos III and was co-funded by the European Regional Development Fund (ERDF), “A way of making Europe.” Research support for individual investigators is listed on the original article. The authors and Pawluksi report no relevant financial relationships.

Batya Swift Yasgur, MA, LSW, is a freelance writer with a counseling practice in Teaneck, NJ. She is a regular contributor to numerous medical publications, including Medscape and WebMD, and is the author of several consumer-oriented health books as well as Behind the Burqa: Our Lives in Afghanistan and How We Escaped to Freedom (the memoir of two brave Afghan sisters who told her their story).