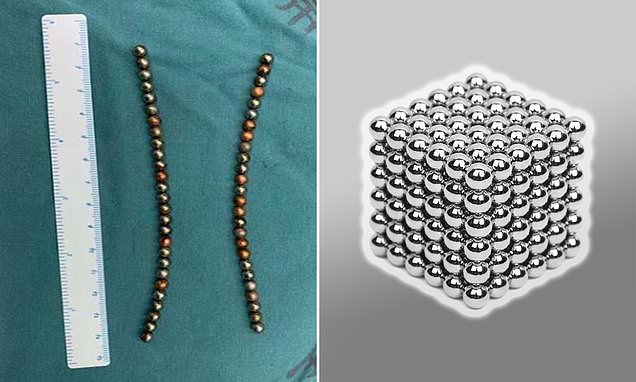 Boy, 14, ‘nearly dies from severe internal bleeding after sticking 53 magnetic beads into his penis out of curiosity’

A Chinese boy reportedly nearly died after sticking 53 magnetic beads into his penis out of curiosity.

Known only as Jiang Hua, he inserted them into his urethra and thought he would be able to remove them himself.

But the 14-year-old failed to do so, and in the process crammed more balls up there in a desperate attempt to draw them out with their magnetic force.

Local reports state his underwear was ‘soaked with blood’ the next day, forcing him to admit to his grandfather what he had done.

He was rushed to Wuhan Children’s Hospital where doctors described him as pale, vomiting, dizzy and in shock.

They surgically removed the magnetic balls, which had clumped together in two strings and reportedly caused life-threatening haemorrhaging.

Another 12-year-old boy had balls removed from his bladder at the same hospital after inserting them into his penis two months before.

‘Buckyballs’ have been scrutinised for being a danger to children, causing death in some cases where they have been ingested. 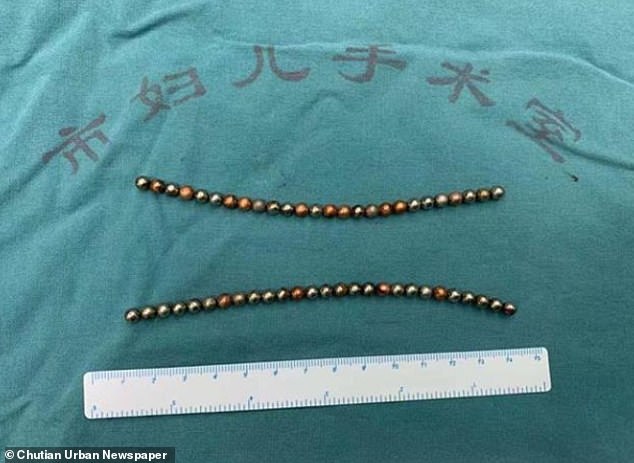 A 14-year-old boy from China nearly died from severe bleeding from his genitals after sticking 53 magnetic beads into his penis out of curiosity. They are pictured after removal 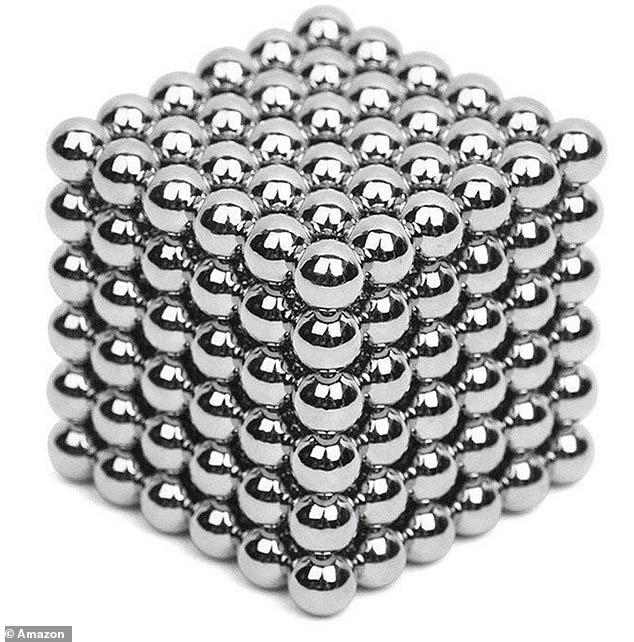 Buckyballs are popular toys sold in the form of metal spheres, which can be stacked into any shape thanks to their magnetic properties. They have caused death by ingestion

Jiang, who grew up with his grandparents, was playing around with the magnets on the night of November 12, Chutian Urban Newspaper reports.

After inserting them into his penis, he thought he could squeeze them out himself. But instead, they were being pushed further and further inside.

He had the idea to use more beads in order to attract them out, and spent nearly an hour doing so, the newspaper claims.

Eventually he gave up and went to bed. Although worried, he decided not to tell anyone about what had happened.

The next day around noon, he discovered blood when he went to the toilet at school.

The bleeding didn’t stop, and that evening he told his grandfather who reportedly was shocked and said the underwear was soaked with blood.

He was taken to the children’s hospital at 11pm that night. Overnight, the hospital director and urologist Dr Wang Jun operated to remove the string of beads.

He saved the teenager from a ‘critical condition’, local reports say.

Last week, a boy under a pseudonym Li Chen also got taken to the hospital having stuck Buckyballs into his penis.

Li, from Wuhan, was only taken to hospital after he began experiencing severe abdominal pains two months after the incident.

After being pulled aside by doctors, he admitted he had forced Buckyballs into his urethra while ‘exploring his anatomy’. 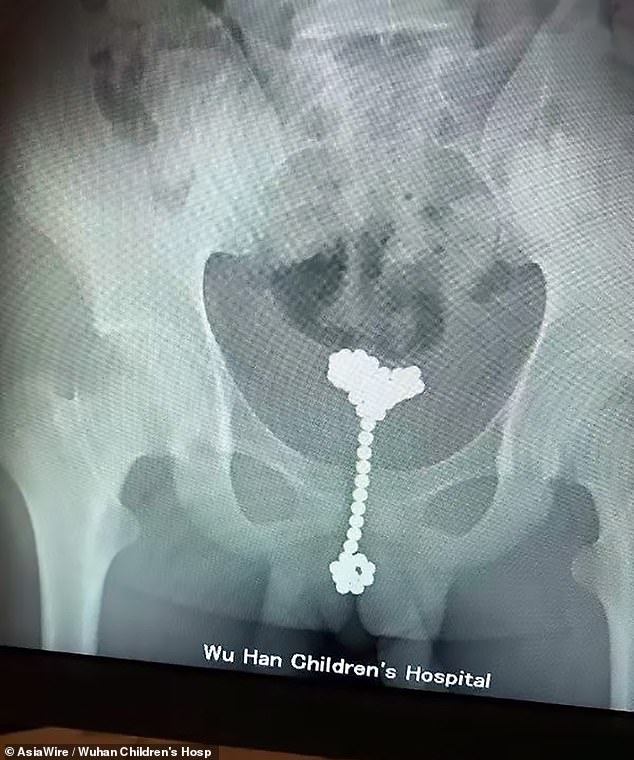 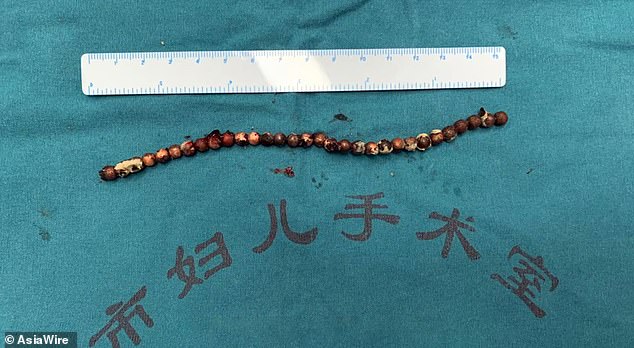 Doctors were faced with a challenge to remove the magnetic balls because they are slippery and can collect in a cluster.

Dr Jun treated Li and said: ‘He was brought to us with abdominal pains which lasted five hours.

‘It didn’t appear to us to be a gastrointestinal problem, so we pulled him aside and asked him.

‘He admitted that, about 70 days earlier, he inserted Buckyballs into his urethra.

‘Buckyballs are magnetic, so they attract each other. They tend to slip when trying to grasp them, or they form a large ball-shaped cluster.

‘It was very difficult to retrieve them. In the end, we removed all 31 by pumping his bladder with air.’ 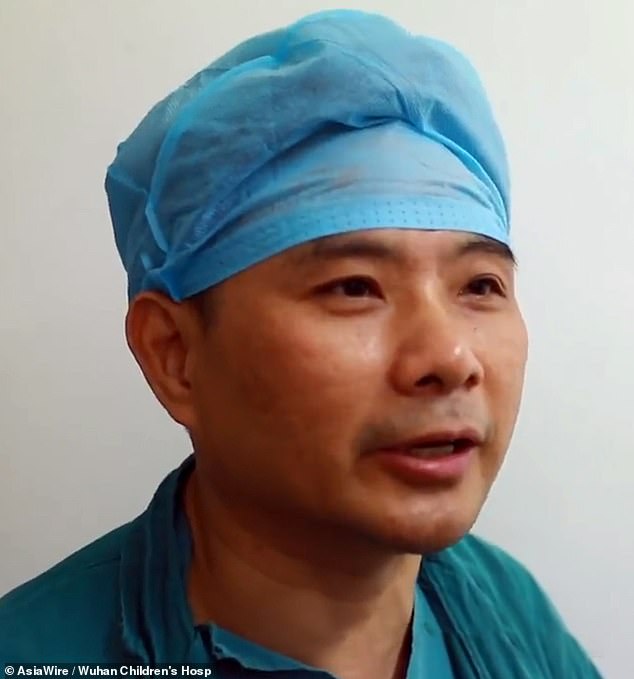 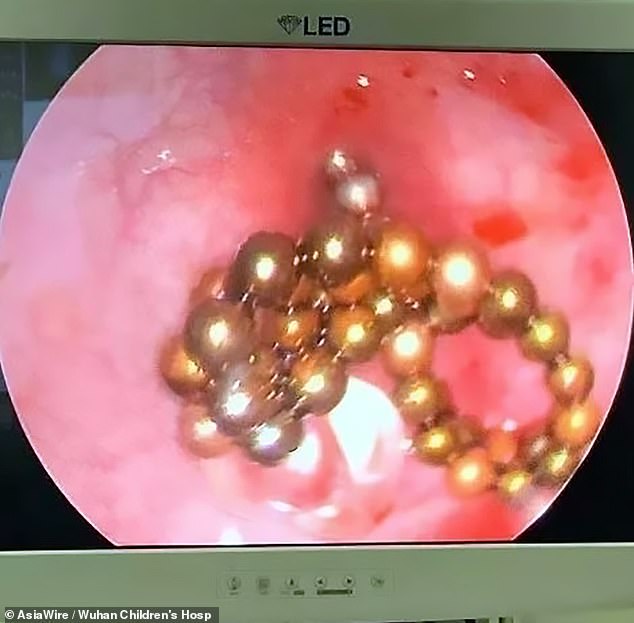 Dr Jun said the magnetic balls were hard to remove because they were slippery and form different shapes. They are pictured in the bladder in a cluster

Buckyballs are popular toys sold in the form of metal spheres, which can be stacked into any shape.

They are banned in Australia and New Zealand.

In 2012 they were banned in the US by The Consumer Product Safety Commission due to a high number of accidents caused by swallowing them.

Children and teenagers may pretend the magnetic balls are tongue piercings.

When two or more high-powered magnets are swallowed, they can attract to one another through the stomach and intestinal walls.

This can result in serious injuries, such as holes in the stomach and intestines, intestinal blockage, blood poisoning and death.

Gastrointestinal surgery may be required to remove the magnets.

A colonoscopy may also be able to find the magnet are remove them.

The medic noted that filling the young patient’s bladder with air made it easier to locate and grasp the foreign bodies, and also avoided the need for a more invasive surgery.

The boy is expected to make a full recovery.

Buckyballs are popular toys sold in the form of metal spheres, which can be stacked into any shape thanks to their magnetic properties.

They were banned in the US in 2012 after thousands of children ingested them, leaving some dead.

However, they were put back on the market after a leading company, Zen Magnets, appealed.

Dr Jun and colleagues are urging parents to be wary of the toys and to teach teenagers about their bodies.

The department receives more than 10 cases of similar foreign bodies every year, the vast majority of which are adolescent children, and the majority of boys, according to reports.

Experts say that Buckyballs are more dangerous than other foreign objects – whether inserted in the genitals or eaten.

The balls are drawn to each other through different organs, which can cause perforations. In the intestine, this could lead to life-threatening