Boy, five, born without an arm can finally cuddle his younger brother after his parents raise £16,000 to buy him a green bionic limb inspired by his favourite superhero The Hulk 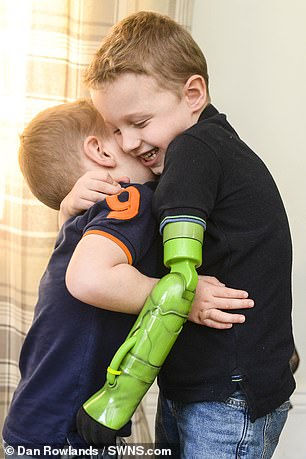 A five-year-old amputee can finally give his younger brother a cuddle after his parents raised £16,000 to buy him a cutting-edge bionic arm inspired by his favourite superhero, The Hulk.

Jacob Scrimshaw, from Calderdale, West Yorkshire, was born without most of his left arm and has a stump protruding from his shoulder.

The youngster’s parents vowed to get him a prosthetic limb after he came home from school crying earlier this year, saying he was fed up of being different.

But mother Gemma and father Chris, both 36, struggled to find one because prosthetics for children are normally created below the elbow.

It’s harder to get the false limb to stay attached to the upper arm and an elbow joint has to be created. Robotic prosthetics are also not routinely available for children on the NHS.

But, after hunting on the internet night after night, the family found an independent prosthetic engineer on Instagram.

They raised £16,000 on GoFundMe and had the limb designed like Jacob’s favourite superhero, The Hulk.

Jacob is now able to snuggle up with his younger brother, Sebastian, three, and push his little sister, Nell, six months, in her pram. 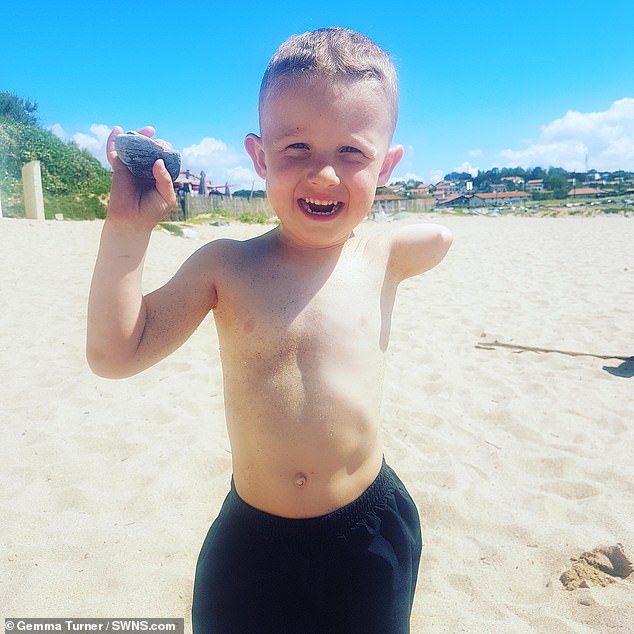 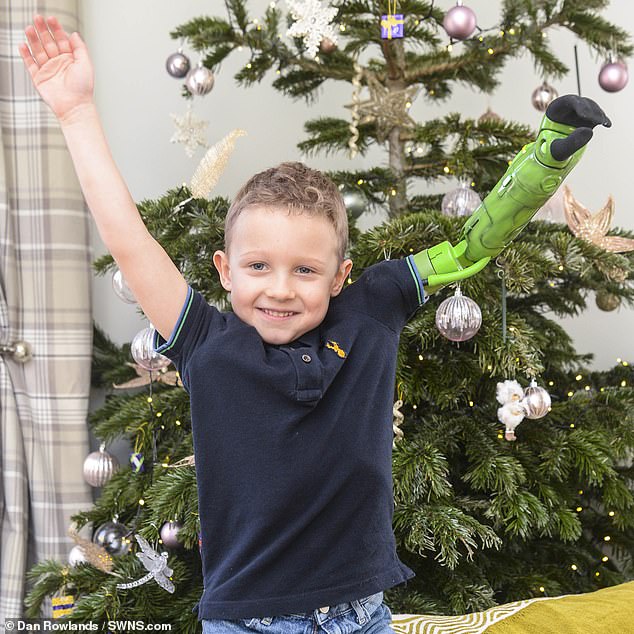 The youngster’s parents vowed to get him a prosthetic limb after he came home from school crying earlier this year, saying he was fed up of being different 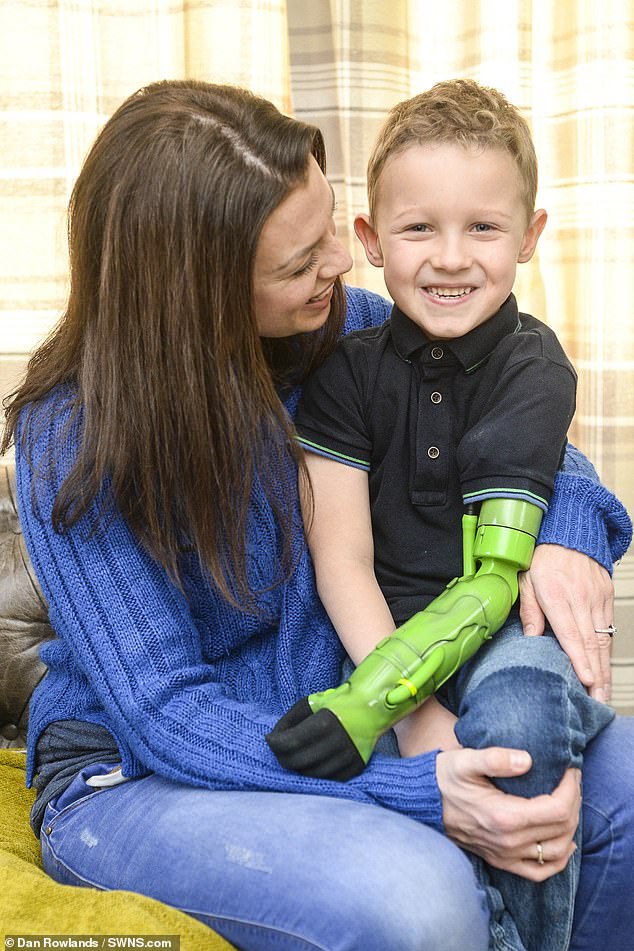 Mother Gemma (pictured) and father Chris, both 36, struggled to find one because prosthetics for children are normally created below the elbow 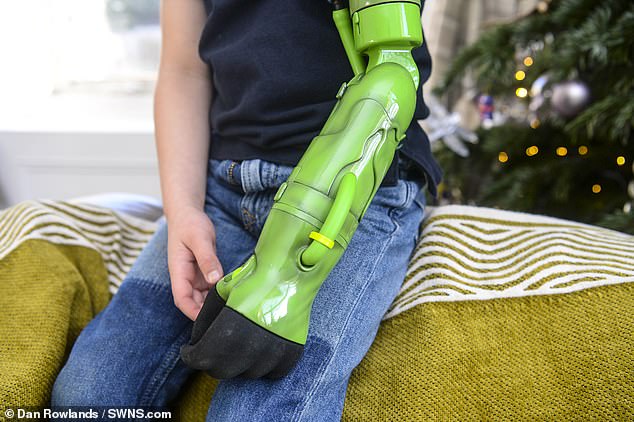 But, after hunting on the internet night after night, the family found an independent prosthetic engineer on Instagram. They saved up to have his designed like the Hulk’s

His police officer mother said: ‘I always thought Jacob coped well without his arm and got on with things, but when he came home from school in tears I knew we had to do something.

‘We started raising money on Go Fund Me in February this year. I knew what we wanted would cost an awful lot of money. We thought we would have to go to America.

‘Jacob loves his arm. He is still getting used to it but it is great, we are thinking it will be fab at Christmas when he’ll be able to open his presents with two hands.’

The mother-of-three said it ‘melted her heart’ to see Jacob holding hands with his brother and father at the same time, which he has never been able to do before.

She added: ‘We always wanted more as Jacob didn’t want a non-functioning arm just to look like everybody else, he’s not bothered about that. He wanted an arm that he could use and do things with.’

The family stumbled across Ben Ryan, from Menai Bridge in Anglesey, Wales, on Instagram while hunting for their son’s dream arm. 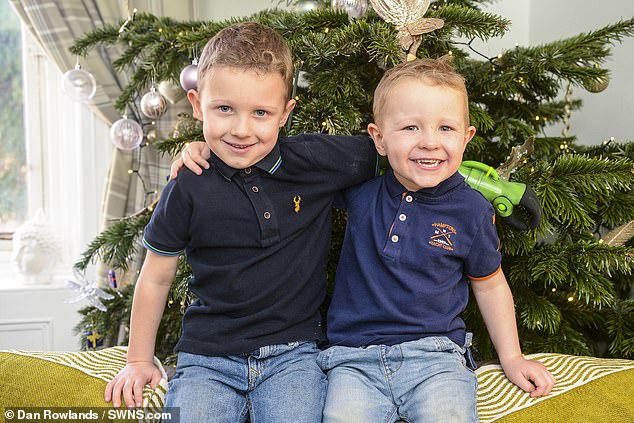 Jacob is now able to snuggle up with his younger brother, Sebastian, three (pictured together) 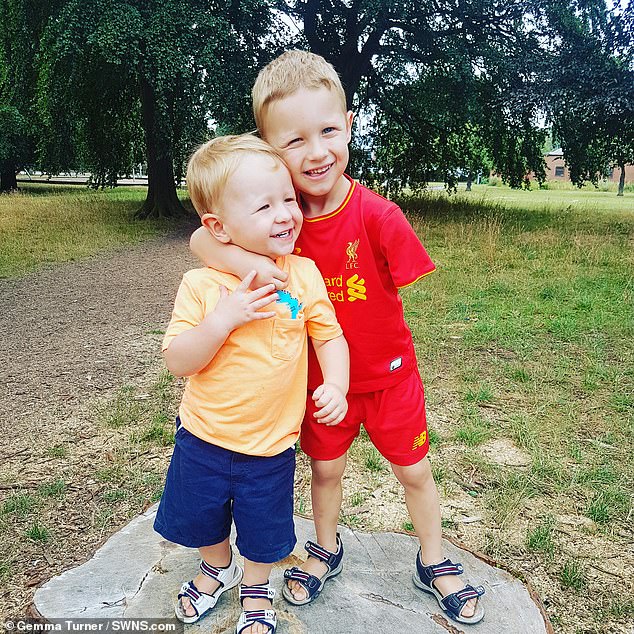 Mr Ryan had originally created an arm for his own child following an accident at birth which meant his son lost his arm at ten days old.

The innovator believed it was best that his son called Solar began using a prosthetic as soon as possible.

Sol, now four, has been wearing his own prosthetic since he was five weeks old and even learned to crawl wearing it.

Mr Ryan is now chief executive of his own company Ambionics, and director of Glaze Prosthetics UK. Jacob is one of their first patients.

Mr Ryan said: ‘The reason why Jacob is the first child to have a powered arm is not necessarily because the technology wasn’t there, but rather that parents do not know it is something that is possible.

‘Jacob’s family is unusual in this case in that when they were told they had to wait for a prosthetic or were told that it would not work for him they refused to give in and kept looking for answers – I was the same. They kept going and luckily they found me.’

The company has worked together with prosthetic service provider Dorset Orthopaedics to create Jacob’s new arm in just 12 weeks. 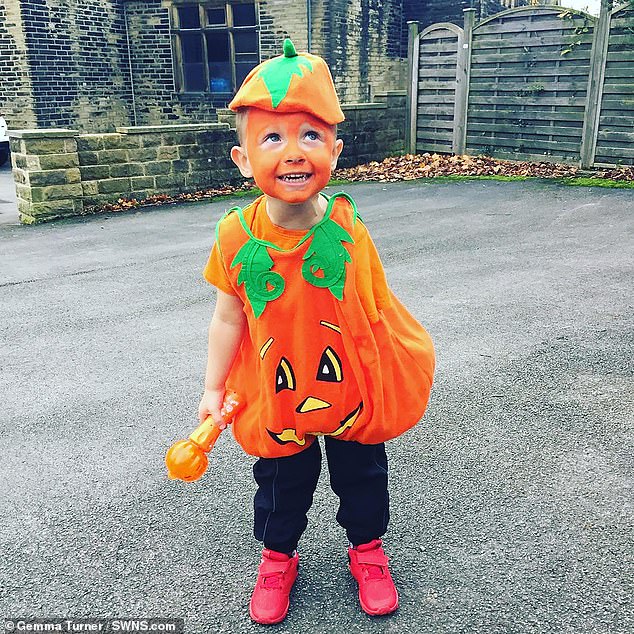 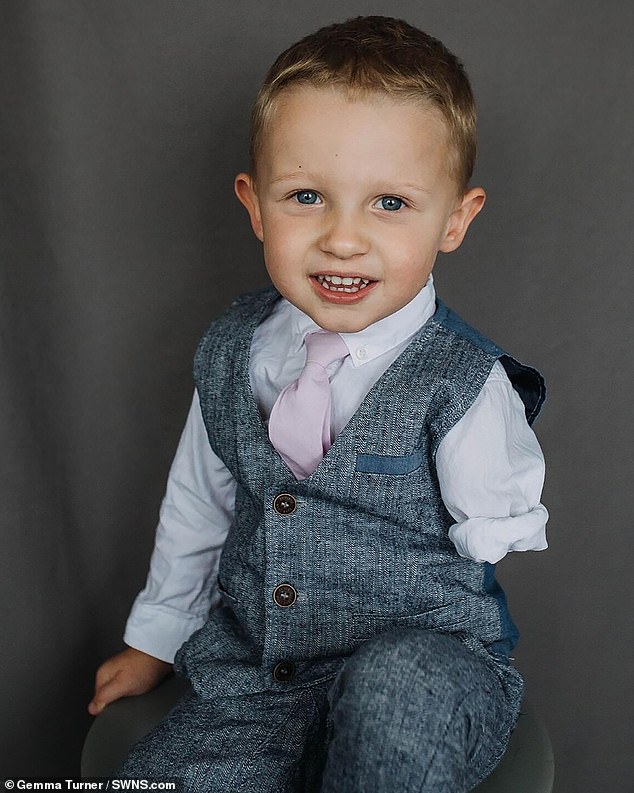 ‘Our super lightweight and highly durable arms enable infants to adapt to prosthetics earlier in their neural development than ever before.

‘Jacob has smashed all expectations, already he is wanting to wear his prosthetic more than we could have hoped for. It is great that he is getting used to it.’

The family are still raising money as they needs funds to make future improvements to the arm as he grows.

WHAT IS CONGENIAL AMPUTATION?

A baby born without a limb or part of a limb.

About one in 2,000 people are born with congenital amputation each year.

This cuts-off the blood supply and halts development of the arm or leg.

Certain drugs, radiation exposure, infections, trauma and metabolic disorders have all been linked to the condition.

However, it is often difficult to pin-point the exact causes in most cases.

Prosthetics are offered to people with the condition on the NHS.

But they give limited dexterity and are usually just for show.