BONNIE ESTRIDGE on life with Alzheimer’s: They’ve banned me from the kitchen… and I’m delighted!

Bah humbug! Phew, glad I got that out of my system. It’s my third A-Word Christmas this year. Or fourth, if you count the one where my meltdown over cooking Christmas dinner led, in part, to me being diagnosed with Alzheimer’s in 2017.

Many things have changed. Some have not.

As you might have guessed, I’m not feeling all that festive – which is fairly normal at this point in December. I’ve done nothing but write cards and rush out to post them, while frantically trying to shop for presents.

The weather is relentlessly miserable, dark, and so windy I keep thinking I might take off and get blown away. And has anyone else noticed how hideously expensive everything is these days?

I know, I know, the festive season is all about moments that we’ll treasure for ever, and reminiscing about Christmases past. But I’m not really into all that, which is just as well. 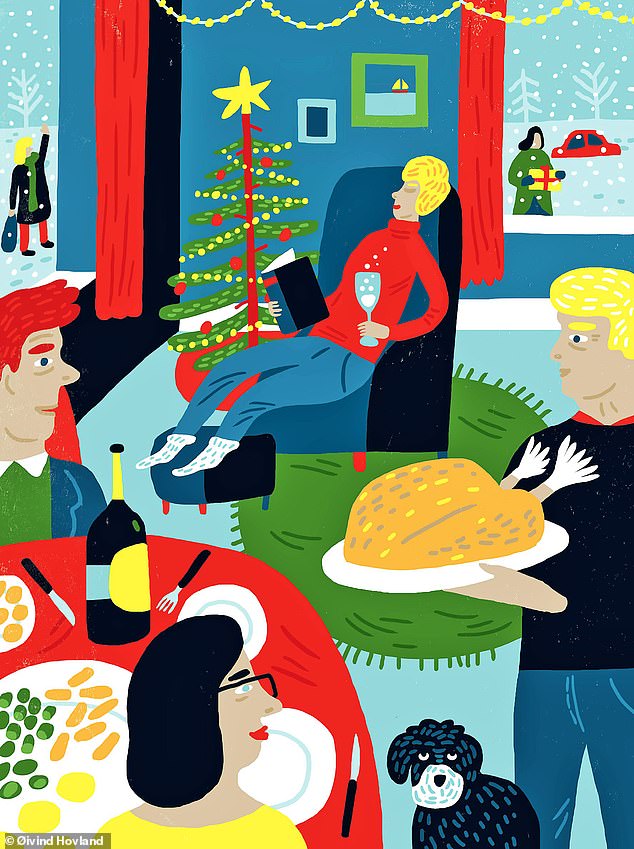 As you might have guessed, I’m not feeling all that festive – which is fairly normal at this point in December

Remembering what I did last week can be tricky, let alone last year. This sounds terribly tragic, but I don’t feel like that.

Yes, I am finding it harder to recall the finer details. But then, Christmas is pretty much the same every year, isn’t it? You’ve seen one, you’ve seen them all… don’t need to remember much.

In all honesty, though, I do love it.

For me now it’s about the family

Last year we all went to stay with my elder daughter Hannah and her partner Keziah in Margate, which was lovely. They went swimming in the tidal pool on Boxing Day, which I thought was incredibly brave.

This year, we’re staying at home. The girls, including my younger daughter Suzy, are coming over for Christmas Day, and my husband Chris will work his magic with a small turkey.

Seeing them is what it’s all about for me.

I’m also now banned from the kitchen, which I’m secretly delighted about. I don’t think I ever liked cooking much, even when it wasn’t totally baffling. As I’ve mentioned before in this column, a key moment in my A-Word journey happened on Christmas Day 2016.

I was making the gravy as I always did – almost on autopilot – when I glanced down at all the ingredients I was using, and realised I had absolutely no idea what to do with any of them. The utensils, and hob, even the kitchen seemed completely unfamiliar.

Chris, and his elderly father Joe, came to my rescue – and we had a lovely lunch.

But it was a turning point. At that point, I’d been struggling with anxiety and other problems for a while. Deep down, though, we all knew that this was something different.

Within six months, I was being seen at the memory clinic at St George’s Hospital, Tooting. And by the end of the year, I knew my problems were ‘probable Alzheimer’s’.

Since then, Chris cooks pretty much everything – even my cheese on toast. I’m not to be trusted manning the hob or oven, definitely no chopping.

So, I have to say, Christmas is pretty stress-free for me.

All I have to do is turn up.

Glen shows it’s not all gloom

In other news, I’m mildly obsessed by a documentary about country music legend Glen Campbell, which I’ve watched about 20 times.

The Rhinestone Cowboy singer allowed cameras to follow him, his wife Kim and daughter Ashley in his final years – while he was living with Alzheimer’s.

At one point, his doctor shows him on a scan the exact area of the brain that shrinks, due to Alzheimer’s, and causes memory loss.

Glen’s poetic response: ‘I figured I’m just… getting [memories] out that I don’t need any more.’

He is forgetful, which I recognise – asking Kim the same question over and over.

But when he plays live, the music just flows out of him – even though, apparently, he used a teleprompter to help with the lyrics.

And I’m a sucker for a good country music number. 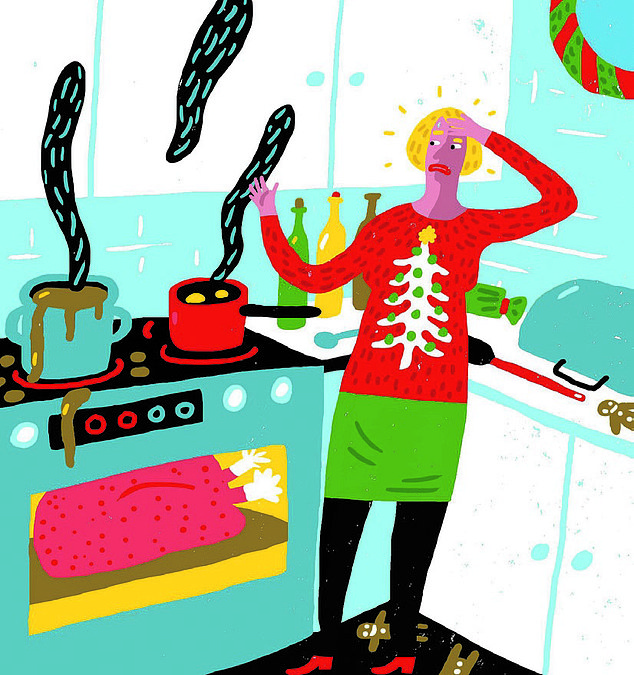 It’s my third A-Word Christmas this year. Or fourth, if you count the one where my meltdown over cooking Christmas dinner led, in part, to me being diagnosed with Alzheimer’s in 2017

Last week, I also watched Elizabeth Is Missing, which stars the amazing Glenda Jackson, looking quite raddled and playing a woman with dementia.

She spends a lot of time wandering around, being lost, looking through windows and obsessively buying peaches.

I hope she wins awards for it.

Chris told me I shouldn’t watch the film. I think he was worried I’d find it upsetting.

I know it’s scary for people to see that side of this horrible illness. They think: ‘I hope that never happens to me.’

But my story, and Glen Campbell’s, prove that Alzheimer’s isn’t all doom and gloom and digging up mud with your hands in the garden – as old Glenda does at one point in Elizabeth Is Missing.

Of course I might one day end up wandering off, not knowing who or where I am.

I don’t know how many more Christmases I’ll be here for, mentally, or physically.

Things get worse with this horrible disease, and they are getting worse for me.

But it’s harder, in many ways, for everyone else.

I’m going to enjoy my Christmas turkey, and a glass of fizz (my antibiotic-related dodgy liver is now, according, to blood tests, fine, so I’m allowed).

And I’m going to feel cheerful about everything that is good in life. Because there’s lots.