At the beginning of the year, when US News and World Reports, released their annual ranking of the most popular diets, the worst (the Dukan Diet) was described by experts as "idiotic". Along with being protein-heavy, it's also rule-heavy, restrictive and entirely lacking in evidence.

But, "idiotic" diets aren't new and with the party season in full swing and the new year nigh, it's a time of year many people are inclined to forgo sense for the sake of svelteness.

I get it: With all the near-naked exposure on the beach, the parties, the reaction against the overindulgence and the endless photos, it is ripe for a fruity collision of vanity and self-consciousness. 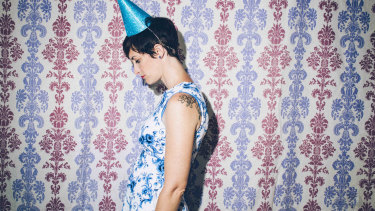 The ‘silly’ season can make us do silly things, like dieting and starving ourselves. Taking a look back through history can help us see it for what it is: Unhealthy, unsustainable and… silly.Credit:Getty

But, before we let this consume us, losing all perspective and balance (not to mention sanity, mental and physical health), it can be helpful to be reminded of our susceptibility to such silliness.

For our health has sadly never stopped people from doing some "idiotic" things in the name of rapid shedding and shredding. This particularly nutty pastime has a long history and seeing it in its full silliness may just inoculate us from the same.

There was William the Conqueror’s liquid-only (and by liquid, he meant alcohol) diet; Elvis Presley’s Sleeping Beauty Diet where he simply popped enough pills to pass out and bypass any hunger; or the Cotton Ball Diet where people were encouraged to eat five cotton balls at a time to stave off hunger (until of course intestinal obstruction became an issue).

There was the Last Chance Diet, which turned out to be an accurate name given several people died suddenly after drinking the predigested gelatinous liquid made of blended animal tissue. Those who didn’t die suddenly could expect to lose a “massive amount of weight” while gaining “such disturbances” as fatigue and dizzy spells, hair loss, dry skin, bad breath and constipation.

And let’s not forget the Tapeworm Diet, where, once swallowed, the parasite would live in your stomach and eat up some of your food for you. But, even the wise among us are vulnerable to the ridiculousness. Hippocrates recommended a diet of light foods, seawater enemas, and vomiting at lunchtime.

Indeed, rapid weight loss via crash dieting or simply starving yourself is not a new idea, but it's never a good one.

Of course, there’s more to it than food and weight. Our bodies have become metaphors for our class, and while thinness was once a sign of poverty, in a consumerist society full of cheap fake food, eating expensive organic food and being slender are now status symbols; signs of restraint and “taste”.

Taking a look at your habits and playing the long-game … is a far more effective way to feel good about ourselves mentally and physically.

So even while we think it’s all about shedding and shredding, there’s really far more driving our decisions than just vanity. But, of course, it is also just fashion. Once upon a time being called “plump as a partridge” was a compliment.

So what to do?

Well, you could listen to the crazed lunatic in your head telling you that shredded abs and losing a couple of kegs for a party pic are worth the price of a month of starvation, turning into a rabid gym rat and enjoying exactly none of the party season.

Or you could decide to ditch the warped thinking that precipitates this behaviour and, in doing so shed some mental weight instead.

Besides as the ever eloquent Mark Manson puts it: “'Lose 20 lbs by summer' is a shitty goal to begin with. That’s because it’s borne from the same spending mindset that keeps people broke — or in this case, keeps them overweight. They view life in the overly-simplistic terms of 'do a lot of X, eventually get Y'.

“Just like forcing yourself to work and save for 20 years is unlikely to get you rich, forcing yourself to go to the gym dozens of times is unlikely to make you lose much weight and keep it off. Goals like this require an intense amount of effort, yet they never seem to 'stick'. Eventually, your energy and discipline run out and you fall right back to the same person you were, except now you feel defeated.”

Taking a look at your habits and playing the long-game instead is a far more effective and healthier way to feel good about ourselves mentally and physically; if we’re moving each day and eating well generally, a party pie and a couple of champagnes at the Christmas party/ies won’t rock the boat.

Regardless, wherever you are at right now, you are already “beach body ready” so please pass the pudding.