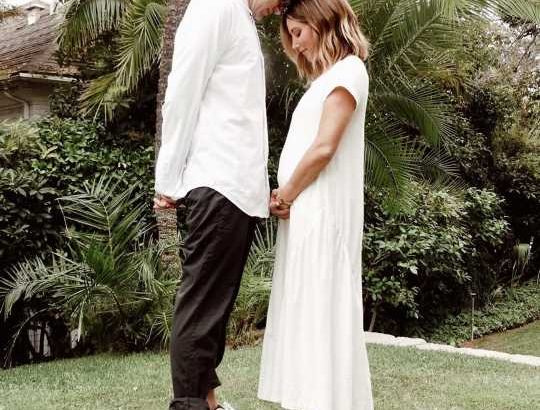 This is the start of something new!

Ashley Tisdale and husband Christopher French are expecting their first child, the couple announced on Thursday.

The High School Musical alum, 35, shared the exciting news by posting a sweet pair of photos that showed off her baby bump.

In the first image, she and the musician stood together while wearing white and looking down towards her bump, while in the second, Tisdale cradled her stomach as the pair smiled at each other.

French also shared a photograph of the couple cuddling up together. Choosing to let the photos speak for themselves, they both shared the exciting news without including captions.

Of course, it was only a matter of minutes before Tisdale's pals began congratulating her on becoming a mama-to-be. Tisdale, who recently starred on the CBS sitcom Carol’s Second Act and the Netflix series Merry Happy Whatever, previously opened up about how she wanted to wait until the right time to start a family.

“For me, it’s like, it’s okay to not want to start a family right away,” the actress told PEOPLE last summer. “People are always asking me about that, but it’s just not the right time.”

Tisdale and French tied the knot in September 2014.

"Wow I can’t believe we’ve been married 6 years?!! Time flies," the actress wrote earlier this month in honor of their anniversary. "I remember having so much fear the minute we got together because I couldnt believe how good you treated me. I had never been treated that way. But I let go and trusted my heart and 8 months later we were a couple of crazy kids engaged."

"Chris you truly have made me a better version of myself because you keep inspiring me everyday. Your heart is pure, you would do anything to make me happy, through the ups and downs you are my solid rock. I’m so grateful I get to be your wife. I love you and after all this time I’m still into you," she added.

Opening up about her relationship with French, Tisdale recently told PEOPLE that spending so much time together in recent months has only solidified their bond.

“He’s a really great guy,” she said. “We’re lucky because we’re very independent people but we love spending time and hanging out together.”

“Being in quarantine together, it’s still that easy. It’s still hanging out with your best friend,” she added.