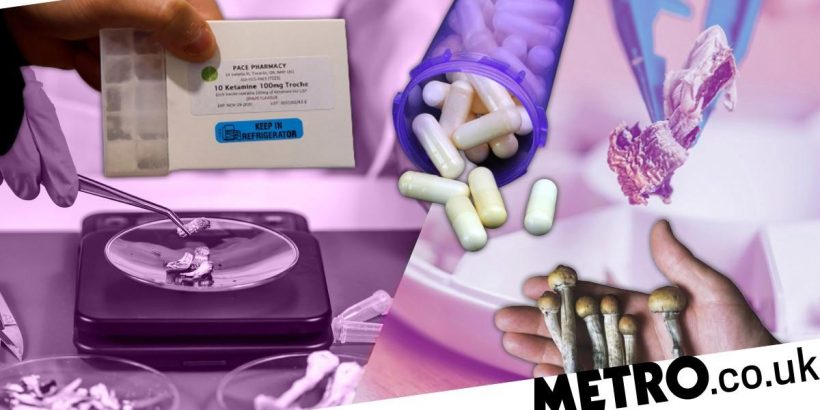 For many of us, the words MDMA, ketamine and magic mushrooms mean party drugs, illicit substances or a throwback to the swinging sixties.

But these stereotypes mask the truth: pychedelic drugs are on their way to becoming official treatments for mental health disorders, such as post-traumatic stress disorder (PTSD), depression, addiction, and anxiety.

In January 2021, the UK’s first medical psychedelic clinic is due to open in Bristol, run by Awakn – an organisation working to integrate psychedelic medicine into mainstream mental healthcare.

The clinic will offer ketamine-assisted psychedelic psychotherapy, which is legal as ketamine is medically licensed as an anaesthetic.

Alongside that service (which has the capacity to treat 30-40 people each month), the clinic will offer training for psychedelic therapists and undertake psychedelic research into MDMA and psilocybin (the psychedelic compound found in magic mushrooms), which are not currently legal for use in psychotherapy.

Interest in psychedelic healthcare is growing globally, particularly in the US.

In November 2020, the state of Oregon voted to legalise psilocybin for therapeutic use, kickstarting a two-year process of working out protocols for offering psychedelic psychotherapy as a mainstream treatment by 2022. It also separately voted to decriminalise possession of small amounts of all drugs.

‘While we’ve done much of the research into psychedelic psychotherapy in Britain, the US is clearly ahead of us,’ says David Nutt, Professor of Neuropsychopharmacology at Imperial College London and the UK’s leading voice on drug reform.

‘They’re also way ahead of us with cannabis.

‘While in the UK the government controls everything, America’s devolved healthcare means that the liberated, sensible states can vote for these changes.’

The concept of psychedelic drugs being used to treat mental health conditions hasn’t yet entered mainstream consciousness, but the evidence for its benefits is striking.

A study by Dr Ben Sessa, who leads the scientific team at the new Awakn clinic alongside Professor Nutt, found that MDMA-assisted psychotherapy is hugely effective in treating alcohol addiction, so often rooted in past trauma.

MDMA and psilocybin are illegal, schedule 1 substances, meaning that a Home Office licence is required for their production, possession or supply. While this complicates research projects in this field, it’s legal to use these drugs in clinical trials, despite them being illegal to prescribe outside of a trial and for recreational use.

London-based mental healthcare company COMPASS is currently undertaking the largest global clinical trial for psilocybin therapy to treat depression, recruiting 216 patients across 21 sites in Europe, the US and Canada.

‘If it’s approved, it gets into the system and is proved to be safe and effective for treating depression,’ says Tracy Yeung, Chief Communications Officer at COMPASS Pathways.

‘We’re generating the evidence that can be used to get into national health systems. At the moment, we’re in the stage of rigorous clinical trials to show that this treatment works, to give people the confidence to eventually use them as clinical therapy.

‘There are 100 million people in the world with treatment-resistant depression – that’s a huge number. It’s a huge economic burden and burden on society and it’s unfair that so many people currently don’t have any options.’

According to Professor Nutt, the ‘war on drugs’ that’s been waging since the 70s is responsible for this burden, by setting back the research into psychedelic medical treatments, and preventing adequate treatments by at least 50 years.

‘There is no country in the world where synthetic psychedelics are legal,’ he says.

‘This has caused about a million excess deaths a year, due to the failures of being able to access medication.’

In 2018, cannabis was legalised for medical use in the UK. But two years on, half of Brits are unaware of the law change, and access to the treatment remains low.

‘You need to be a specialist doctor to prescribe medical cannabis, and we only have about 40 of those specialists across the country,’ says Professor Nutt, who is also currently leading Project Twenty21, an audit aiming to enrol 20,000 patients being prescribed medical cannabis to produce more research on its efficacy.

‘The plan with Project Twenty21 is to gather data to show that doctors prescribing medical cannabis get good results.’

But even with these staggering figures, it remains unlikely for a patient to be prescribed medical cannabis by the NHS.

Why might psychedelics be effective for treating mental health conditions?

Traditional treatments for mental health disorders such as depression, anxiety and PTSD include talking therapies, like Cognitive Behavioural Therapy (CBT), and antidepressants such as SSRIs.

But these therapies treat the symptoms of mental health conditions, rather than addressing their cause – which is often rooted in trauma, ranging from childhood abuse to PTSD in soldiers returning from conflict.

‘I like psychedelics because I don’t like psychiatric drugs,’ says Dr Sessa, who believes that MDMA could be the mental healthcare equivalent of antibiotics in terms of its groundbreaking efficacy.

‘We’ve got a huge backlog of chronic, lifelong mental disorder that we treat with maintenance therapy. SSRIs and mood stabilisers just paper over the cracks. Psychedelic psychotherapy is the best pharmacology we have to treat these disorders.

‘Psychiatry has painted itself into a corner where we don’t talk about ‘cure’, and I don’t think that’s good enough. Other branches of medicine wouldn’t accept the poor outcomes we accept in psychiatry. It’s like breaking your ankle and being prescribed paracetamol for the rest of your life.

‘But with psychedelics, we can take a person in their 20s or 30s with a history of severe childhood abuse and a severe mental disorder like PTSD, and we can completely cure them and send them on their way.

It’s important to note that introducing psychedelic psychotherapies could save the NHS a serious amount of money. A study by MAPS in the USA found that if public healthcare payers or private insurers made MDMA-assisted psychotherapy available to just 1,000 patients, healthcare costs would be reduced by $103.2million over 30 years.

How does a psychedelic therapy session go down?

In medical MDMA and psilocybin trials, as well as with ketamine-assisted therapy at Awakn’s upcoming Bristol clinic, psychedelics are administered periodically during a weeks-long course of psychotherapy.

‘It’s not at all just taking some psilocybin at home,’ says Yeung.

‘It’s combined with psychological support from a specially trained therapist, in a special clinic. Before you go for your administration session you have preparatory sessions to explain what you’ll go through.

‘On the day of the experience, you take your psilocybin, you lie on a bed with eye shades on and listen to a carefully curated playlist, and sit with the therapists who will be there throughout the whole experience to support you. Then afterwards you’ll speak to the therapist about the experience.’

Dr Sessa also points out that while ketamine-assisted therapy already exists to treat depression, the Awakn clinic will be the UK’s first to use it alongside psychotherapy.

‘In 99% of ketamine clinics around the world, the psychedelic aspect is seen as an annoying side effect. The patient gets hooked up to a drip for a couple of ours and lies there with no interaction with anyone.

‘In our clinic, the patients are essentially on a seven-week course of regular psychotherapy, in which they take ketamine on four occasions and have psychotherapy during the ketamine sessions.’

MDMA and psilocybin therapy sessions can last for six to eight hours – a full day of treatment – while ketamine is faster-acting, and lasts up to 90 minutes in a therapeutic session. After your treatment, you’ll take a couple of hours’ recovery time before heading home.

‘Drug policy is connected to our work,’ says Dr Sessa.

‘Prohibition relies on a substance being dangerous. But you undermine the dangerous aspect of a drug if a doctor is prescribing it.

‘Our prohibition drug laws in the UK have been entirely ineffective at their job, which was to control these substances. After 50 years of prohibition, drugs haven’t gone away.

‘In fact, far more people are using psychedelics now than they were in the 60s.’

And as long as medical access to psychedelics are illegal, people will self-administer them from the black market – sometimes to treat their own mental health concerns.

‘I was in talking therapies for nearly two decades, and it was gruelling,’ says Laura How, a therapist and counsellor near Bristol.

‘I experienced an abusive childhood and for people who have experienced complex trauma, I’m not sure if talking therapy is always enough.

‘I took antidepressants, but they didn’t work. But when I started taking psilocybin, I stopped getting long periods of depression. I started to feel lighter and lighter, after feeling heavy my whole life.’