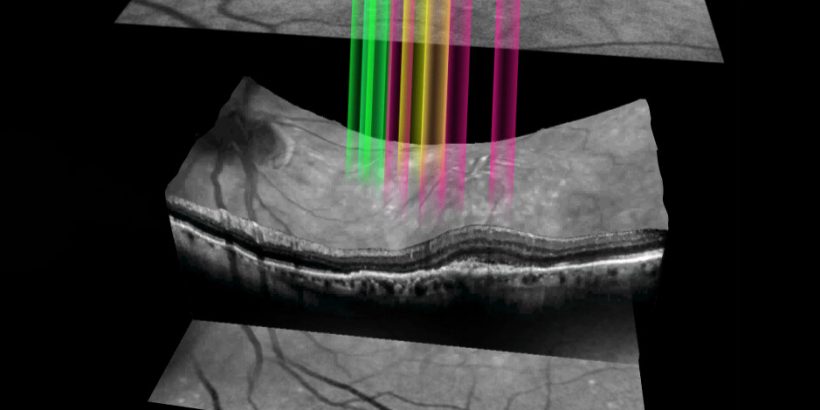 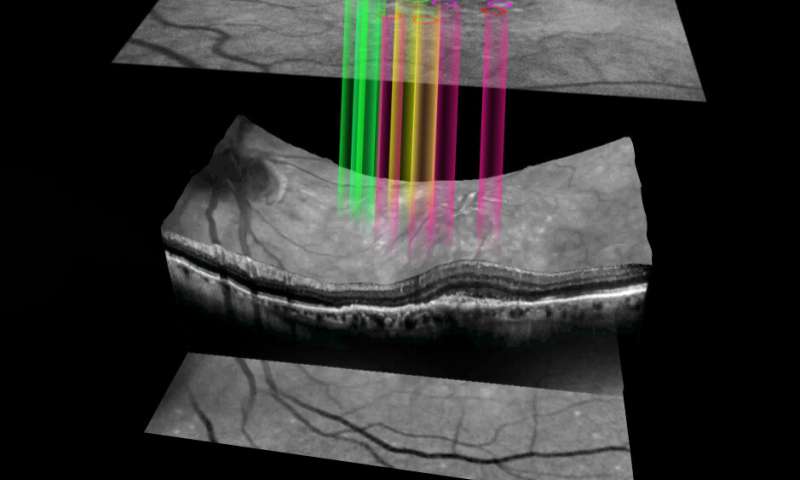 A pioneering new eye test, developed by scientists at UCL in collaboration with the Western Eye Hospital, London, may predict wet AMD, a leading cause of severe sight loss, three years before symptoms develop.

Researchers hope their test could be used to identify the disease early enough so that treatment can effectively prevent any vision loss.

The findings of the study, funded by Wellcome, are published today in Expert Review of Molecular Diagnostics.

Wet age-related macular degeneration (AMD), also known as macular disease, is the most common cause of permanent and severe sight loss in the UK.

Currently the diagnosis of wet AMD relies on a person developing symptoms, which then leads them to seek advice from a clinician. Initially, someone with wet AMD would notice distortion in their vision, normally interfering with their reading. Very quickly, this can progress to complete central vision loss, which may be extremely troubling to elderly patients who will fear blindness and loss of independence.

Wet AMD involves abnormal growth of blood vessels, which leak fluid into the retina. The introduction of new treatments has led to much improved results for patients, for a disease that over 20 years ago was regarded as untreatable. However, patient outcomes could be even better if treatment was started in the very earliest stages of the disease.

The test, called DARC (Detection of Apoptosing Retinal Cells), involves injecting into the bloodstream (via the arm) a fluorescent dye that attaches to retinal cells, and illuminates those that are undergoing stress or in the process of apoptosis, a form of programmed cell death. The damaged cells appear bright white when viewed in eye examinations—the more damaged cells detected, the higher the DARC count.

One challenge with evaluating eye diseases is that specialists often disagree when viewing the same scans, so the researchers have incorporated an AI algorithm into their method.

Using the same technology (test) the researchers had previously found that they can detect the earliest signs of glaucoma progression. This new study, which forms part of the same ongoing clinical trial of DARC, assessed 19 of the study participants who had already shown signs of AMD, but not necessarily in both eyes. The AI was newly trained to detect the formation of leaking and new blood vessels, which corresponded with the spots that DARC picked up.

The researchers say their test could be valuable in detecting new lesions in someone affected by AMD, often in the opposite, unaffected eye, and may eventually be useful for screening people over a certain age or with known risk factors.

Lead researcher Professor Francesca Cordeiro (UCL Institute of Ophthalmology, Imperial College London, and Western Eye Hospital Imperial College Healthcare NHS Trust) said: “Our results are very promising as they show DARC could be used as a biomarker for wet AMD when combined with the AI-aided algorithm.

“Our new test was able to predict new wet AMD lesions up to 36 months in advance of them occurring and that is huge—it means that DARC activity can guide a clinician into treating more intensively those patients who are at high risk of new lesions of wet AMD and also be used as a screening tool.”

The study team hope to continue their research with a clinical trial with more participants, and hope to investigate the test in other eye diseases as well.