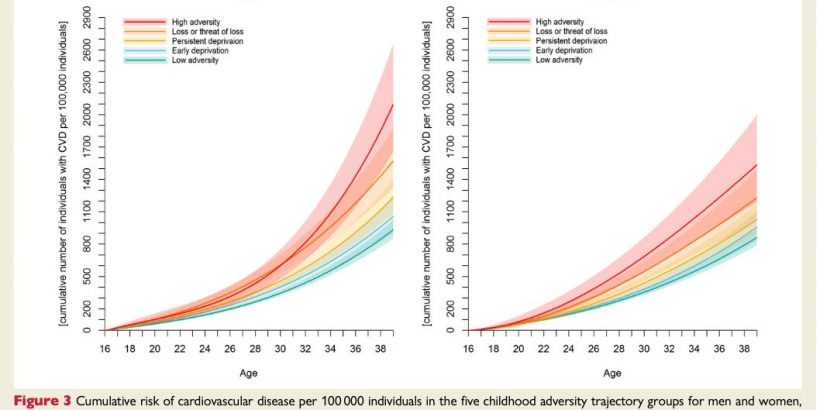 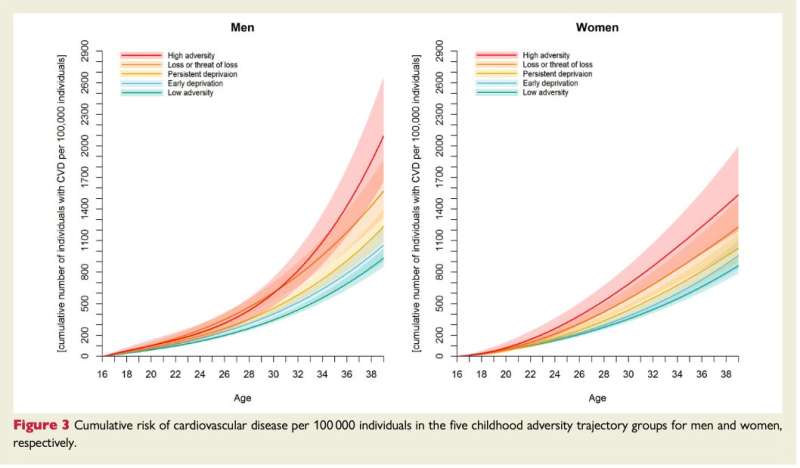 Children who experience adversity, including serious family illness or death, poverty, neglect, or dysfunctional and stressful family relationships, are at increased risk of developing diseases of the heart or blood vessels in early adulthood.

The new research, which is published in the European Heart Journal today, is the largest study so far to look at the links between childhood adversity and cardiovascular disease (CVD). It followed nearly 1.3 million children, born between January 1980 and December 2001, up until 31 December 2018. During this time 4,118 developed CVD between their 16th birthdays and the end of 2018, by which time the oldest were 38 years old.

Senior author of the study, Professor Naja Hulvej Rod, head of epidemiology at the Department of Public Health at the University of Copenhagen, said, “Compared to young adults who experienced little adversity in childhood, we found an approximately 60% higher risk of developing cardiovascular disease among young adults who had experienced adversity.

“This was especially true for those who had experienced serious illnesses, such as cancer, heart or lung diseases, or death in the family, and those who had experienced high and accelerating levels of adversity in childhood. In absolute numbers, this corresponds to 10–18 extra cases of CVD per 100,000 person-years. For comparison, the average incidence rate of CVD among a 30-year-old person is approximately 50 cases of CVD per 100,000 person-years.”

The researchers used data from the DANish LIFE course (DANLIFE) cohort, which includes continuously recorded information from numerous nationwide registers. They identified 1,263,013 children who were alive and living in Denmark until their 16th birthdays and who were not diagnosed with CVD or congenital heart disease during this time.

They divided them into five groups based on adversity experienced between the ages of 0 and 15:

The researchers adjusted their analyses to take account of factors that could also increase the risk of CVD, such as age, maternal age at birth, parental origin, and any parental diseases of the heart, blood vessels or metabolism. In supplementary analyses, they also adjusted for gestational age and parental education. They excluded people whose parents had an illness related to the heart or metabolism, such as diabetes or heart disease, which might predispose their children to developing these conditions.

The researchers found there was little difference in the risk of developing CVD between the 2,195 men and 1,923 women in the study. The risk was highest among people who experienced severe illness or death in the family and among those who experienced high and increasing rates of adversity throughout childhood and adolescence.

Prof. Rod said, “The association we saw between childhood adversity and CVD in early adulthood may be explained partly by behaviors that can affect health, such as drinking alcohol, smoking and physical inactivity. Childhood is a sensitive period characterized by rapid cognitive and physical developments; the frequent and chronic exposure to adversity in childhood may influence the development of the physiological stress response, and this may provide an important explanation for the mechanisms underlying these findings.”

The researchers plan to investigate the possible underlying mechanisms for their findings so as to understand the impact of childhood adversity on CVD prognosis and survival. This will include access to health care, possible non-compliance with treatments, and other health problems among children from socially difficult backgrounds. The current study has built on earlier work the researchers carried out that showed a substantially higher risk of premature mortality, including deaths due to CVD, and hospitalizations due CVD among young adults, who had experienced adversity in childhood and adolescence.

Prof. Rod said, “The incidence of CVD is low in early adult life, but increases substantially during this period. This highlights the importance of research into non-genetic early life risk factors, which may be targeted for early prevention. The experience of adversity is common among children, and in this study we show that children who experience long-term and severe stress from serious illnesses and death in the family, and children who are exposed to high rates of adversity, including deprivation, family loss, and dysfunctional and stressful family relationships, have a higher risk of developing CVD in early adulthood. Targeting the social origins of such adversity and ensuring supportive structures for families who are—for example—struggling with disease in the family, may potentially carry long-term protective effects.”

Professor Gunnar Gislason, head of research at the Danish Heart Association, commented, “We know far too little about the connection between early trauma and stress in childhood and the risk of cardiovascular disease later in life. That is why this project is so important, as it can potentially reveal one of the explanations for the social inequality in cardiovascular disease.”