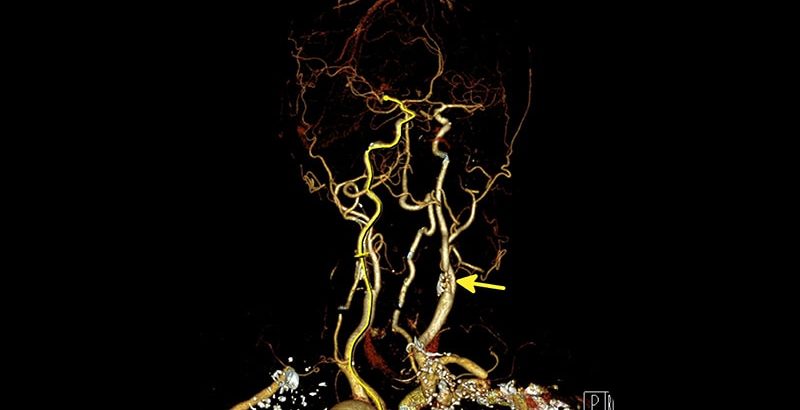 Carotid artery stenting (CAS) and carotid endarterectomy (CEA) provided comparable outcomes over time in asymptomatic patients receiving good medical therapy in the largest trial to date of what to do with severe carotid artery narrowing that is yet to cause a stroke.

Among more than 3600 patients, stenting and surgery performed by experienced physicians involved a 1.0% risk for causing disabling stroke or death within 30 days.

The annual rate of fatal or disabling strokes was about 0.5% with either procedure over an average 5 years’ follow-up — essentially halving the annual stroke risk had neither procedure being performed, according to Alison Halliday, MD, principal investigator of the Asymptomatic Carotid Surgery Trial-2 (ACST-2).

The results were reported today in a Hot Line session at the virtual European Society of Cardiology (ESC) 2021 Congress and published simultaneously online in The Lancet.

Session chair Gilles Montalescot, MD, Sorbonne University, Paris, France, noted that ACST-2 doubled the number of randomly assigned patients with asymptomatic carotid stenosis studied in previous trials, “so, a huge contribution to the evidence base in this field and apparently good news for both revascularization techniques.”

The trial was conducted in 33 countries between January 2008 and December 2020, enrolling 3625 patients (70% male; mean age, 70 years) with carotid stenosis of at least 60% on ultrasonography, in whom stenting or surgery was suitable but both the doctor and patient were “substantially uncertain” which procedure to prefer.

Among the 1811 patients assigned to stenting, 87% underwent the procedure at a median of 14 days; 6% crossed over to surgery, typically because of a highly calcified lesion or a more tortuous carotid than anticipated; and 6% had no intervention.

Among the 1814 patients assigned to surgery, 92% had the procedure at a median of 14 days; 3% crossed over to stenting, typically because of patient or doctor preference or reluctance to undergo general anesthesia; and 4% had no intervention.

Patients without complications who had stenting stayed on average 1 day less than those undergoing surgery.

During an earlier press briefing, Halliday highlighted the need for procedural competency and said doctors had to submit a record of their CEA or CAS experience and, consistent with current guidelines, had to demonstrate an independently verified stroke or death rate of 6% or less for symptomatic patients and 3% or lower for asymptomatic patients.

But with stenting, there was a slightly higher risk for procedural nondisabling strokes (48 vs 29; P = .03), including 15 strokes vs 5 strokes, respectively, that left patients with no residual symptoms. This is “consistent with large, recent nationally representative registry data,” observed Halliday, from the University of Oxford, United Kingdom.

For those undergoing surgery, cranial nerve palsies were reported in 5.4% vs no patients undergoing stenting.

The investigators performed a meta-analysis combining the ACST-2 results with those of eight prior trials (four in asymptomatic and four in symptomatic patients) that yielded a similar nonsignificant result for any nonprocedural stroke (RR, 1.11; P = .21).

Based on the results from ACST-2 plus the major trials, stenting and surgery involve “similar risks and similar benefits,” Halliday concluded.

Discussant Marco Roffi, MD, University Hospital of Geneva, Switzerland, said, “In centers with documented expertise, carotid artery stenting should be offered as an alternative to carotid endarterectomy in patients with asymptomatic stenosis and suitable anatomy.”

While the trial provides “good news” for patients, he pointed out that a reduction in the sample size from 5000 to 3625 limited the statistical power and that enrollment over a long period of time may have introduced confounders, such as changes in equipment technique, and medical therapy.

Also, many centers enrolled few patients, raising the concern over low-volume centers and operators, Roffi said. “We know that 8% of the centers enrolled 39% of the patients,” and “information on the credentialing and experience of the interventionalists was limited.”

Further, a lack of systematic MI assessment may have favored the surgery group, and more recent developments in stenting with the potential of reducing periprocedural stroke were rarely used, such as proximal emboli protection in only 15% and double-layer stents in 11%.

Friedhelm Beyersdorf, MD, University Hospital of Freiburg, Germany, said that, as a vascular surgeon, he finds it understandable why there might be a higher incidence of nonfatal strokes when treating carotid stenosis with stents, given the vulnerability of these lesions.

“Nevertheless, the main conclusion from the entire study is that carotid artery treatment is extremely safe, it has to be done in order to avoid strokes, and, obviously, there seems to be an advantage for surgery in terms of nondisabling stroke,” he said.

Session chair Montalescot, however, said that what the study cannot address — and was the subject of many online audience comments — is whether either intervention should be performed in these patients.

Unlike earlier trials comparing interventions to medical therapy, Halliday said ACST-2 enrolled patients for whom the decision had been made that revascularization was needed. Additionally, 99% to 100% were receiving antithrombotic therapy at baseline, 85% to 90% were receiving antihypertensives, and about 85% were taking statins.

Longer-term follow-up should provide a better picture of the nonprocedural stroke risk, with patients asked annually about exactly what medications and doses they are taking, she said.

“We will have an enormous list of exactly what’s gone on and the intensity of that therapy, which is, of course, much more intense than when we carried out our first trial. But these were people in whom a procedure was thought to be necessary,” she noted.

When asked during the press conference which procedure she would choose, Halliday, a surgeon, observed that patient preference is important but that the nature of the lesion itself often determines the optimal choice.

“If you know the competence of the people doing it is equal, then the less invasive procedure — providing it has good long-term viability, and that’s why we’re following for 10 years — is the more important,” she added.