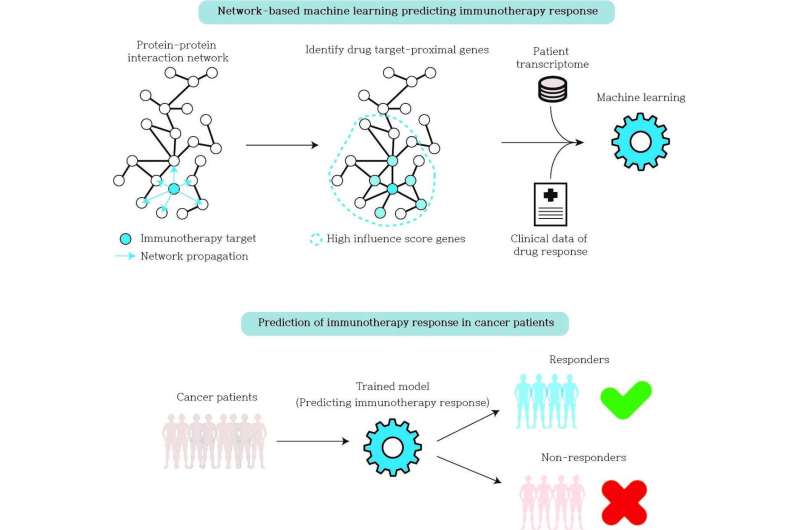 Immunotherapy is a new cancer treatment that activates the body’s immune system to fight against cancer cells without using chemotherapy or radiotherapy. It has fewer side effects than conventional anticancer drugs because it attacks only cancer cells using the body’s immune system. In addition, because it uses the memory and adaptability of the immune system, patients who have benefited from its therapeutic effects experience sustained anticancer effects.

The recently developed immune checkpoint inhibitor has considerably improved the survival rate of patients with cancer. However, the problem with cancer immunotherapy is that only approximately 30% of cancer patients receive benefits from its therapeutic effect, and the current diagnostic techniques do not accurately predict the patient’s response to the treatment.

Under these circumstances, the research team led by Professor Sanguk Kim (Department of Life Sciences) at POSTECH is gaining attention as they have improved the accuracy of predicting patient response to immune checkpoint inhibitors (ICIs) by using network-based machine learning.

The research team discovered new network-based biomarkers by analyzing the clinical results of more than 700 patients with three different cancers (melanoma, gastric cancer, and bladder cancer) and the transcriptome data of the patients’ cancer tissues. By utilizing the network-based biomarkers, the team successfully developed artificial intelligence that could predict the response to anticancer treatment. The team further proved that the treatment response prediction based on the newly discovered biomarkers was superior to that based on conventional anticancer treatment biomarkers including immunotherapy targets and tumor microenvironment markers.

In their previous study, the research team had developed machine learning that could predict drug responses to chemotherapy in patients with gastric or bladder cancer. This study has shown that artificial intelligence using the interactions between genes in a biological network could successfully predict the patient response to not only chemotherapy, but also immunotherapy in multiple cancer types.