The phenomenon of fluorescence is a form of luminescence, and it is exploited by techniques that have innovated ways to utilize its light emittance to gain insights into target materials or substances. 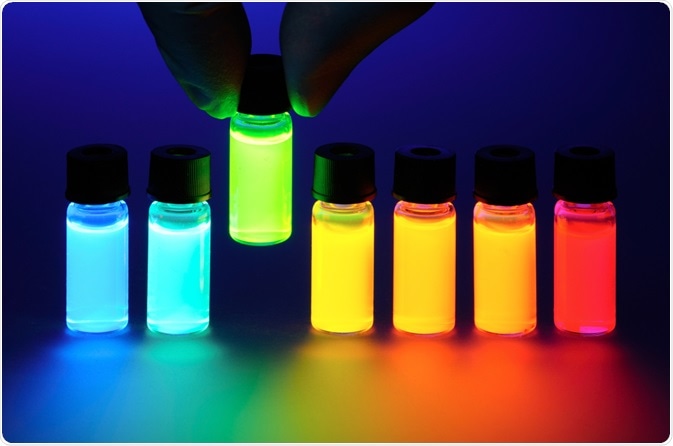 Fluorescence techniques were designed to observe and analyze the composition of samples, as well as interactions between various biomolecules within living cells, including proteins, nucleic acids, or lipids. Numerous biophysical methods exist that take advantage of fluorescence.

Fluorophores that emit light are used to identify the presence of various molecules within a bio-molecular structure. Quite often, fluorescence techniques are used to investigate the contents of live cells.

How the fluorescence process works

The essence of how the fluorescence process works lies within the ability of the fluorophore to emit light after it has been exposed to particular wavelengths of light during an absorption phase. The fluorophores are selected to respond to certain stimuli within a biological sample. The process works in a three-stage process:

Excitation is the first stage of the process. This is where energy is supplied to the fluorophore in the form of a light source, which could be an incandescent lamp or a laser. Incident photons have the impact of exciting the fluorophore after it has been absorbed, initiating an excited electronic singlet state.

Firstly, the fluorescent emission is initiated by the dissipation of the energy that was passed to the fluorophore during excitation. Also, not all the molecules that became excited, return to their normal state. These processes can be analyzed and are important for identifying the components and interactions within a substance.

After the initial excitation-state phase, energy dissipates from the molecules, and the fluorophore returns to its ground state. This release of energy produces the fluorescent emission, and it can be observed as a longer wavelength than was presented at the time of excitation because the photon has lost some energy.

The length of time that it takes for the fluorophore to emit its energy depends on the interactions it made with its environment, and this can tell researchers about the sample it has been added to. The difference observed between the initial wavelength and the wavelength emitted is called the Stokes shift.

There are four key parts common to most fluorescence techniques. As has been highlighted, there first needs to be a source of excitation (a light source), a fluorophore, wavelength filters, which are required for the identification of emission photons against excitation photons, and a form of detector that can pick up the emission photons, usually recording them in the form of an electronic signal.

The fourth and final factor essential to fluorescence techniques, that of a detector, exists in four types. The first is spectrofluorometers and microplate readers, these detectors are used to measure the average properties of bulk samples.

Fluorescence microscopes are the second kind, and they present fluorescence as a function of spatial coordinates. This can be in either two or three dimensions, and the technique is usually used for microscopic samples.

The third kind is the fluorescence scanner, like microarray readers, for example. These detectors also present fluorescence as a function of spatial coordinates, but only in two dimensions. This technique is used for macroscopic objects, like electrophoresis gels and chromatograms, for instance.

The final kind of detector is the flow cytometer, and it measures fluorescence per cell in a flowing stream.

The fluorescent quality of the fluorophore is reliant on factors such as how capable it is of undergoing repeated excitation/emission cycles, and how efficient it is at absorbing and releasing photons.

After studying Psychology and then Neuroscience, Sarah quickly found her enjoyment for researching and writing research papers; turning to a passion to connect ideas with people through writing.