My weight gain started while still on active duty in the Marine Corps, after a surgery put me on convalescent leave for a long period of time, which led me to getting out of shape and gaining weight. I left the Marines within a year of that surgery, and the weight continued to increase as I took a desk job at a computer company. Over a 20-year period, a poor diet led to my weight going from 190 pounds to 320 pounds at my heaviest.

I had begun cutting out sodas and trying to limit calories, but had only succeeded in losing about 16 pounds in five years. I felt tired, always winded, and old. I thought I felt that way because I was in my late forties. It wasn’t until I started exercising regularly and lost 130 pounds that I realized that I wasn’t feeling old, just very unfit.

I had developed type-2 diabetes and was taking Metformin, I had poor circulation and tingling in my lower extremities, and I had fatty liver disease. My cholesterol was high, and my gums and vision were both deteriorating as a result of the diabetes. I was 48 when I woke up one morning and couldn’t tie my shoes without holding my breath because my gut was so large. That was the straw that broke the camel’s back for me, and was the impetus for me looking into healthier lifestyles. This coincided with a visit from my cousin Sarah, a Physician Assistant, who told me that I needed to change my lifestyle or face an early demise. She introduced me to Whole30 and the Paleo diet.

Before I was able to begin with the lifestyle change, I had to enlist the support of my wife. Without her being involved in the change, I felt that I had no chance of success. I finally convinced her to join me after I assured her that Paleo food can be delicious. We started with a Whole30 that was wildly successful for both of us. I lost 20 pounds and she lost 10 pounds. Although Whole30 isn’t specifically designed for weight loss, it was a nice side effect of breaking the sugar addiction. After that, we transitioned slowly and carefully into Paleo. We didn’t count macros or measure portions, but we did keep our portion sizes “fist sized,” and we eliminated anything that wasn’t considered Paleo.

My wife began with exercise right away, but due to the pain in my joints, I waited to begin exercising until I had lost 130 pounds in that first year. Then, I started doing pushups and began walking, which led to jogging, and finally running, which I still do today. I now do pullups, pushups, StrongLifts 5×5, and run immediately afterwards every other day. This has helped me to be able to pass the new Army Combat Physical Fitness Test (ACFT), which many people consider to be more difficult than the previous Army Physical Fitness Test. 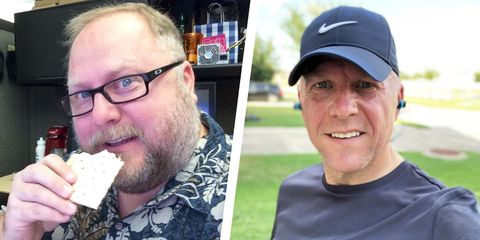 The total amount I lost was around 150 pounds, but since I started weightlifting, I have gained some weight back as muscle. I feel incredible: much more energy, stronger, fewer injuries, and my joints feel great. I used to get a lot of knee pain, but squats have actually nearly eliminated those pains.

Staying motivated for me involves the fact that I’m now in the National Guard, and I need to stay physically fit and prepared. Another thing that kept me motivated was I was seeing results almost every week with increased strength, flexibility, mobility, and the ability to engage in more physical activities like hiking, bike riding, running with my wife, and soon, kayaking.

I don’t see my journey as having a destination. For me, this is a lifestyle I’m embracing until the end.