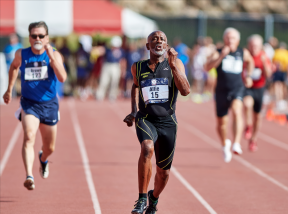 I haven’t stopped running since my childhood,” says Charles Allie, 73, and that may be a secret to why he’s running now. Although he ran track in high school and college, the retired industrial-arts teacher and track coach, who lives in Pittsburgh, found real success in his 40s and later. Now he holds several world age-group records, including in the 200 meters (24.65) and 400 meters (57.26). He was named USATF Overall Masters Athlete of the Year in 2016, 2018, and 2020.

By all rights, he should be a lot slower than he is—the kind of muscle fibers that give you explosive power tend to get smaller over time. But Allie’s times suggest that his body just seems not to have bought into that.

“I’ve been fortunate not to have had any major injuries. This may be due to how I train and eat,” he says. “Breakfast—usually oatmeal, eggs, toast, fruit, orange juice or green tea—is my most important meal to fuel my body.” Then it’s more home-cooked meals with natural ingredients for the rest of the day.

Cardio makes up about 85 percent of his training and includes high-intensity sprinting as well as some middle distance for recovery. He works on race skills like starts and stays balanced with stretching and weights—“lighter lifts at a faster pace to enhance the muscles I use in sprinting,” he says.

“As I look at my senior generation, I realize that we will be faced with some life-threatening health issues. As an African American, I am aware that we may be faced with even greater health issues than other people are,” he says. “Some of these health issues can be lessened if we take control over our physical and nutritional health. Eliminate the excuses! I believe the confidence and health benefits gained by doing so outweigh the efforts it takes to work out and sweat a little.”

This article originally appeared in the April 2021 issue of Men’s Health.