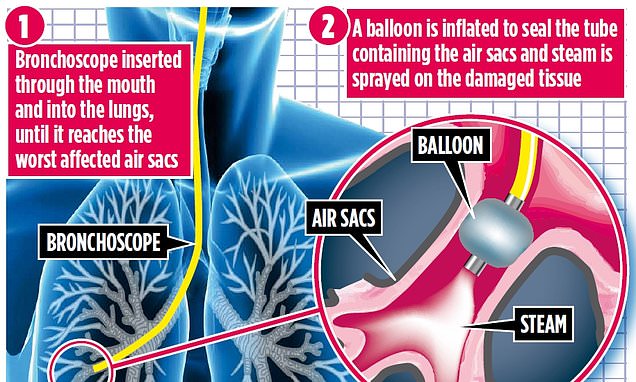 A quick blast of steam could give thousands of Britons battling debilitating breathlessness a new lease of life. The new procedure aims to help people with severe emphysema – a common lung disease which usually affects people over 50.

In just 15 minutes, doctors can treat damaged tissue in the lungs with a burst of heated water vapour, which scars the tissue.

Over a period of days, this damaged, scarred tissue shrinks, freeing up space in the lungs and making it easier to breathe.

Within weeks, patients who struggled with even basic tasks such as showering have been able to walk further than they have for years. 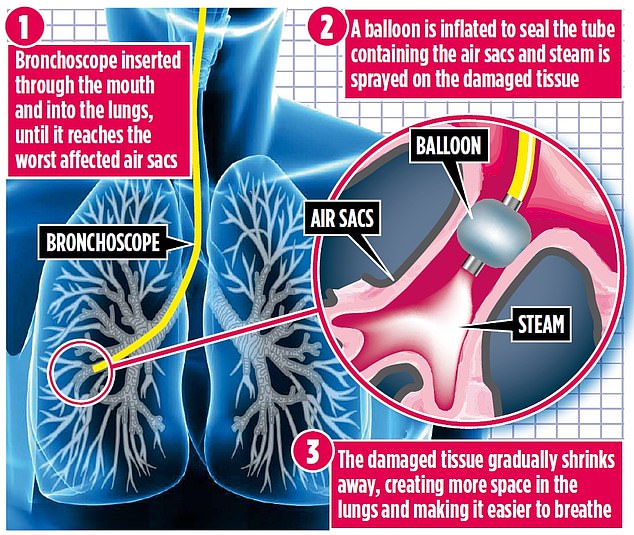 Over a period of days, this damaged, scarred tissue shrinks, freeing up space in the lungs and making it easier to breathe

The pioneering steam treatment, developed in the US, is now being offered at two NHS hospitals. ‘This new procedure aims to improve the lives of patients with very severe emphysema,’ explains Dr Mohammed Munavvar, who is performing the procedure at Lancashire Teaching Hospitals NHS Trust.

Emphysema is a form of chronic obstructive pulmonary disease – or COPD – which affects more than a million people in the UK and is responsible for 30,000 deaths every year.

Dr Munavvar says: ‘Many patients have virtually no quality of life, extremely poor mobility and are not able to walk a great deal at all.

‘This is not a miracle cure but we hope it will help relieve symptoms – and mean patients can walk further independently.’

Healthy lungs are made up of millions of tiny air sacs called alveoli where oxygen is taken into the blood stream and carbon dioxide expelled. In patients with emphysema, the air sacs are weakened and damaged.

The damage, often caused by smoking or pollution, reduces the amount of oxygen that reaches the bloodstream, causing breathlessness, coughing and fatigue.

Eventually, the sacs can break apart and merge, creating gaps in the lungs which can lead to air getting trapped and causing them to over-inflate. This can cause discomfort and make it even harder to breathe, with less room for fresh oxygen to enter the lungs.

The new treatment, known as Bronchoscopic Thermal Vapour Ablation or BTVA, can be used to target very precise areas and – unlike surgery – requires just moderate sedation. Most patients are kept in hospital for only one night and some are even well enough to go home the same day. 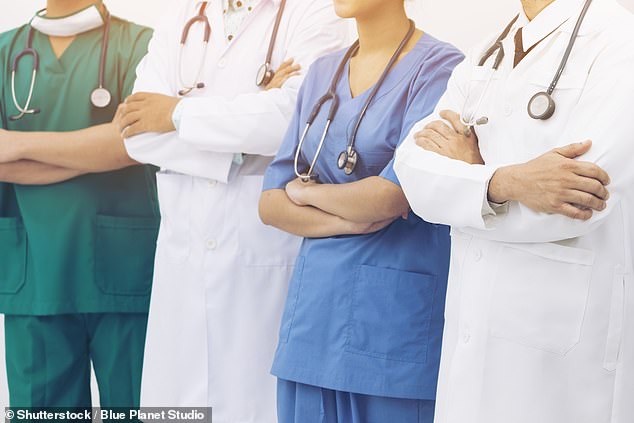 In just 15 minutes, doctors can treat damaged tissue in the lungs with a burst of heated water vapour, which scars the tissue (stock image)

Dr Munavvar, a consultant chest physician, says: ‘The shrinkage takes about four weeks and during that period, there may be some worsening of symptoms. But afterwards, patients seem to start to notice the benefit.’

The new technique is currently available only at Lancashire Teaching Hospitals and Royal Brompton & Harefield NHS Foundation Trust in London as part of a research study. During the procedure, a tube containing a camera – a bronchoscope – is fed through the mouth to the lungs and to the worst affected area which needs to be treated.

A balloon is passed through the tube to its tip, where it is inflated to block the airway. The obstruction means the steam reaches the targeted area only.

A dose of steam is then sprayed through a separate channel in the tube for between three and ten seconds. After 20 seconds, the balloon is removed and the airways are assessed. At most, two parts of the lungs will be treated in one sitting. Any more risks severe inflammation which can cause further problems.

The procedure can be repeated a few months later, to treat any additional parts of the lung.

Serena Young, 63, from Leyland in Lancashire, was one of the first UK patients to undergo the procedure. She was diagnosed with emphysema ten years ago, having smoked for much of her adult life.

‘I wasn’t able to walk very far, and even found housework hard,’ she says. ‘I always had to think about how I was going to do things beforehand – especially if there were stairs involved.’

In September, she underwent the pioneering procedure at Royal Preston Hospital, under the care of Dr Munavvar.

‘It was absolutely amazing – and so quick it was untrue,’ Serena says.

She was allowed home the next day and within a couple of weeks her condition began to improve.